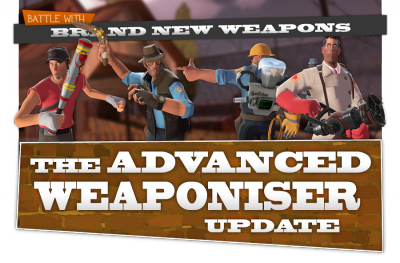 Welcome to the Advanced Weaponiser Wiki[]

Advanced Weaponiser is a server-side mod for the hit class-based shooter Team Fortress 2 that allows players to equip various custom weapons, created by Mecha the Slag.

Advanced Weaponiser 2 has gained huge popularity due to its close connection to the gaming community. Most, if not all weaponry is based on community suggestions and/or implementations.

The mod features over 60 weapons, with varying unique effects including, but not limited to controllable rockets, climbing walls, and even reviving killed players.

Weapons can be earned through random drops that occur while connected to the server or purchased using Slag Shillings.

The complete list of all the active weapons on the mod can be seen on this page.

Advanced Weaponiser is also one of the very first gamemodes Slag Gaming has hosted, being released originally in 2010.

Advanced weaponiser has had a great reputation, even at the beginning of it's lifespan, and it was the first gamemode ever to have it's own independent server on Slag Gaming. Before that, there was only 1 Slag Gaming server, the TF2Ware server. The gamemode was praised in Facepunch for bringing more weapons to TF2, and some weapons even have stats suggested in the mod's Facepunch thread.

The gamemode has suffered many changes since it's creation. During late 2011 and early 2012, Advanced Weaponiser suffered a great change, when it became Advanced Weaponiser 2. Mecha and the other developers took this chance to overhaul to the inventory system and even the weapons. Because of this, many weapons disappeared. You can check out some removed weapons here .

Advanced Weaponiser, being one of the first ever custom gamemodes, has had a very long development cycle, and many developers have worked on it. For example, CHAWLZ was made a Slag developer thanks to his contribution to AW2. In the beginning, most weapons were created by Mecha The Slag himself, a few by developers, and two or three by the community (a good example of a community contributer is Renya, who scripted the very popular Quickie Launcher) , but as time passed, more and more community weapons got in.

Due to the need for more weapons, developers started making Weapons of the Month, where a select number of weapons created by the developers themselfves would be tested for one month on the server, and if they received postive feedback they would be added to the gamemode. There have been examples of weapons getting in the gamemode (e.x Rage Launcher, Rocket-flare), or weapons that received positive feedback, but not enough for a full gamemode entry, so the devs choose to instead put the weapons on another month (e.x Fists of Fury).

Still, there was yet another type of testing, which prooved to be more efficient, but also harder to do, which was the Weapons of the Day method, a method were a weapon would be inserted within the gamemode for one day or more, depending on how good or bad the weapon worked. If the weapon received enough positive feedback, the devs would implement it into the gamemode.

The success of the gamemode was due to the already established Slag community, the forums and other websites like facepunch and even youtubers like gNatFreak.

The gamemode's sucess took a bit of a dive in April 14th 2011, the day serverside attachment models were completely blocked. This was due the fact that players began paying real money just to be able to play on a server with diferent skins. Valve did not like this one bit and released the patch that would forever disable weapon viewmodels on the AW2 servers.

Server-side model attachments, as used in popular mods like VS Saxton Hale Mode and Advanced Weaponiser are now entirely disabled.

There have been several attempts to bring the models back, some that even worked, but after a while were removed. Once, due to the need of custom models (viewmodels and worldmodels) in the (at the time) early gamemode, Parkour Fortress, Mecha the Slag asked Robin Walker if he could let Mecha implement the models. Because Robin did not answer, Mecha asked kindly to the forums if they could also email Robin. The result was a huge spam email influx. Robin Walker, while he did let Mecha implement the models, was totally pissed at him.

The gamemode definitely deserves the success it got, and grew alot until mid 2012.

Late 2012 and early 2013 were dark years for AW2, due to the lack of weapons, the big focus on AHiT and other projects. Though, by late 2013's the server seems to have started to recover, and will hopefully be back to it's former glory soon enough.

Community content is available under CC-BY-SA unless otherwise noted.
Advertisement